Software commands our redundant sensor network and processes huge amounts of data every second. The iShiploader backend software can either be implemented in the indurad System or on a PLC. Interfaces to SCADA and MES / TOS Systems are available (e.g. for loading the load plan and defining the loading pattern). To define loading patterns, indurad can provide a simulation tool. 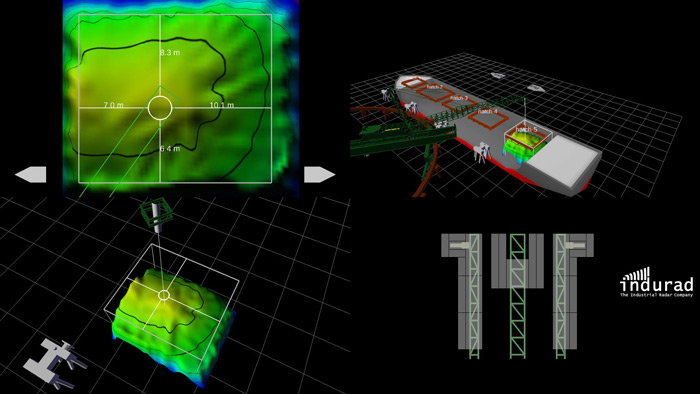 Same but different. Our solution is customizable for different shiploader and shipunloader types and the specific customer requirements. We have already installed collision avoidance, operator assistance and automation packages on all standard shiploader types in different climate zones and for handling different commodities.

Back in 2008 we founded indurad with a clear focus on helping mining machinery in underground and open pit mines to work more efficiently and safely.

One day, we were told about an accident in a coal export terminal. Two shiploaders crushed into each other. Just a minor mistake after a long shift – but however, one shiploader was down for some time.

As there was no real solution to this problem on the market, indurad developed a GPS based solution to monitor the position of the shiploaders and compare their positions (3D geometric CAS system) and also to detect any object around shiploaders.

We adapted our knowledge about safety and automation to the world of hulls, hatches, deck levels, heave and sway. We learned about berth and jetty, about the differences of common sliding hatch doors and vessels with folding hatch covers – which, to be frank, caused our collision warning system to act “like a Christmas tree” (according to our customer) at first.

To increase a shiploader's capacity by installing larger belts a customer had to remove the operator cabin. Therefor indurad had developed a remote control system for operators, allowing them to monitor and control a machine, they cannot see. Shorter shift changeover times had led to higher machine uptimes. Radar technology provided the highest reliability despite any limitation of sight, like dust, steam or fog.

Based on the success of productivity, shiploader semi-automation for loading operations had been required and evolved. Today, our shiploader solutions are not only installed and commissioned in many ports and terminals, they are highly accepted by operators and by management as well. The number of accidents has been reduced while installation numbers has gone up.

Currently we are commissioning a fully automatic shiploader with deep learning functionality to improve the ship loading process. An internal research and development project is about measuring the transportable moisture limit indirectly. This would be part of a set of features for automatic trimming and hatch automation to reduce the likelihood of cargo shifting according to IMO IMSBC Code 2009 for Group A.

We are also in dialogue with insurance companies and associations such as Swedish Club, TT-Club, the Port Equipment Manufacturers Association (PEMA) and ICHCA International about safety and more productivity, compliant with upcoming regulations.

Radar has a 100% market share in maritime collision avoidance and object tracking – due to its resillience to environmental conditions that are common in the maritime industry. Our radar technology is the best choice on the market for applications around shiploaders.