The system was developed as part of a close collaboration with indurad’s long-standing partner voestalpine in Austria, to which indurad delivered its first 3D radar for installation in a blast furnace in 2013 after several years of joint R&D. Bell Equipment’s headquarters in South Africa significantly reduced the project implementation time through collaboration with indurad on establishing the drive-by-wire interface and their joint vision on interoperability.

indurad is a global leader in the fields of 3D inventory control, machine positioning and advanced automation, having developed solutions that apply unique high-resolution 2D and 3D radar technologies and turnkey automation software packages from pit to port and from port to plant. indurad’s primary focus is debottlenecking along the entire material flow chain. Material haulage and crushing present significant bottlenecks in open pit mines and quarries.

“The iTruck system offers true autonomy along optimal paths and is therefore capable of reacting dynamically to changing mine site environments. It actively avoids collisions even with smaller debris, both through its dynamically updated environmental map and its unique perception system. It maximises safety and productivity through its robust multi-sensor positioning and sophisticated control of complex vehicle kinematics like those of articulated machines. The accuracy enables maneuverability into narrow crusher entries or roadway sections at high velocities.”

“Automation systems have historically been deemed too complex to implement, too sensitive, and insufficiently flexible for operations such as quarries,” says Dr Christian Riedel, Head of Mining Automation at indurad. “This perception has led to high resistance, although most now acknowledge that it is the necessary next step for required safety and productivity increases in our industry.”

The automation system’s perception is based on indurad’s unique 360° radar technology scanning with up to 50 revolutions per second. indurad’s radar technology is designed for the harsh mining environment and does not compromise on point cloud imaging unlike low-cost automotive radar sensors that rely on inaccurate digital beam forming, patch antennas and integrated MMIC chipsets. It scans the machine’s surroundings with high accuracy (sub-millimeter ranging accuracy) while being largely unaffected by environmental influences such as dust, rain, fog, or snow. indurad says radar is the only technology that maintains its high OEE in even the harshest mining environments.

McKinsey’s compendium about future mobility in 2018 concluded that for autonomous functions “a combined solution of radar and camera might be dominant for the next five to eight years,” where LiDAR is not required at all. Within the McKinsey concept a camera provides optical lane detection and object details which voestalpine considered unnecessary in rocky mining environments. The goal is to reduce the sensor diversity as a key for increased availability in off-road applications – “with only the world’s best radar plus a standard high accuracy GNSS.”

Designed with smaller fleets in mind, the system operates by allowing the excavator or shovel operator to direct the fleet from a touch panel. Therefore, further supervision is not required and time losses are minimised. “indurad’s deep understanding of process bottlenecks has driven integration of the shovel and the crusher into the complete AHS solution. By integrating the haulage system with indurad’s iCrusher solution, the AHS optimises the ROM, increasing the mine’s throughput capacity and as a result its output.”

The AHS may be configured and supervised through an intuitive user interface with advanced graphics for map and route design, machine monitoring, safety system status, and service features. The user interface displays a real-time 2D and 3D visualisation of the entire loading, haulage, and crushing process.

Reik Winkel, mining engineer and indurad’s CEO, points out that the iTruck solution currently caters to small to medium sized mining customers that cannot adapt their mine plan to AHS by enabling simple integration into existing environments with mixed fleets. However, its flexible design and open interfacing allows for integration into large scale operations as well. He adds: “Besides mining, this concept enables robust automation in indoor and outdoor industrial applications, such as metallurgical plants such as smelters. indurad is proud of the strong support from our investor Resource Capital Fund RCF Jolimont.”

The AHS encompasses a holistic safety concept and fully complies with ISO 17757:2017 for autonomous and semi-autonomous machine system safety. To fulfill its objective of simplicity and flexibility, it already meets the criteria of the upcoming standards for autonomous system and fleet management system interoperability. The system incorporates an extension of ISO 23725 as a drive-by-wire communication interface, developed in close cooperation with Bell.

A development for fully GNSS-denied and hybrid environments, such as underground mines with access ramps, is also ongoing as part of ARTUS, a R&D project supported by a research grant from the German governmental BMBF. The consortium is led by indurad in collaboration with other industrial partners in the industry and academia. 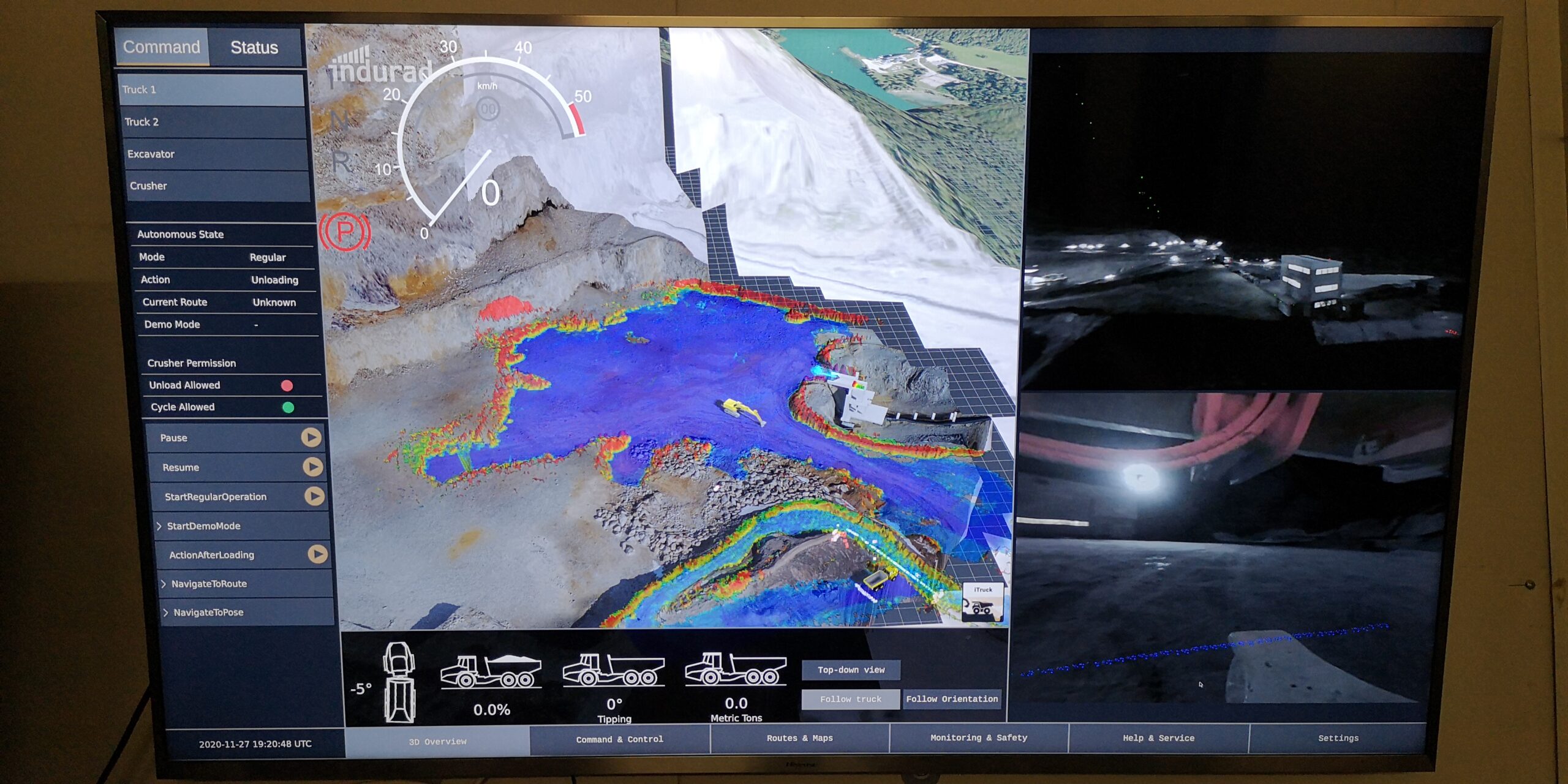 indurad sensors for a streamlined stockyard